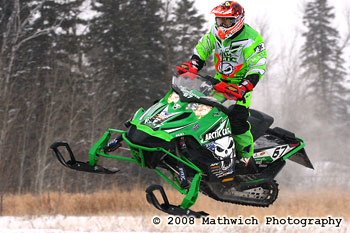 It was just a matter of time before Ryan Simons foray into USCC cross-country competition would result in victory. On a gnarly 100-mile course in Ada, Minn., and with a pace that one competitor described as “wicked,” Simons scored the first cross-country victory of his career and his first Pro class victory of the season.

It was a fitting finale for a race that saw seven class victories by Team Arctic, including a sweep of the Pro classes.

“Our racers and teams continue to win and place at the top of their class,” said Team Arctic Race Manager, Mike Kloety. “To win seven classes, place five in the top-10 of the Pro 600 class and notch a majority of the podium positions proves strength and depth of our team.”

The highlight of the weekend came in Pro 600, where Simons attacked both laps of the 44-mile course, blasting ditch approaches at full-throttle and banging through the deep moguls with fury. His cumulative time of one hour, 25 minutes and thirty five seconds was more than a minute faster than teammate and second-place finisher D.J. Ekre.

Ekre continued his season-long winning streak in Pro Open, where once again Team Arctic racers filled five of the top-10. In what was his first ever cross-country race in Minnesota, snocrosser Cory Davis of Soldotna, Alaska, was on pace for a podium finish when he suffered a couple mechanical gremlins. He finished ninth, but his talent indicates better finishes for later this season.

“Cross-country racing is so valuable because every race day brings new challenges to man and machine,” said Kloety, “And our machine adapts well to everything our racers have pounded it through. Yet each race is an opportunity to improve our machines, and each week we get better than the last.”

Ekre’s borrowed Sno Pro 600 must have had some good black magic, because Chad Kyllo raced the same sled to an outstanding win in the Semi Pro Improved class.

Adam Brandt remains on top of the Amateur classes with wins in both Amateur 600 and Amateur Improved. And Adam Mach scored his big win in the Junior 10-13 class.

For more information go to www.usccracing.com.