Show A Big Hit With Thousands of Snowmobilers 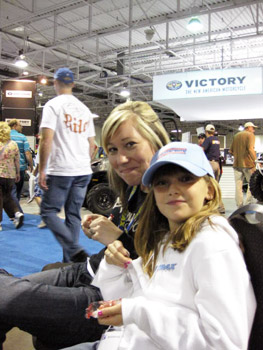 Optimism and anticipation for the upcoming snowmobiling season were the watchwords as the Ontario Federation of Snowmobile Clubs (OFSC) welcomed thousands to its 2nd OFSC Go Snowmobiling Show at the Toronto Congress Centre, 650 Dixon Road last weekend.

The Greater Toronto Area’s only pure snowmobiling show successfully built on its Go Snowmobiling mandate to introduce more new participants to snowmobiling and to connect more families, couples and seniors with the snowmobiling lifestyle.

“Our show is all about the snowmobiling experience and whenever I looked down the aisles there were dozens of families, including toddlers in strollers and many of the youth that will be our next generation of riders,” enthused OFSC President Bruce Robinson. “The OFSC is very encouraged by both the size of the turn out and the good mix of people who attended, because one of our primary goals was to create a family-friendly setting where parents would be comfortable taking their kids and where folks could discover snowmobiling in a classy setting.”

One of the comments heard most often from snowmobilers attending the show was how much they enjoyed that every booth featured products and information specifically related to sledding.

Many also loved the OFSC aisle, where they bought their trail permits and collected all their 2009 trail maps at once and without having to search all over a show floor.

Several first timers remarked that they felt right at home meeting and talking one on one with OFSC volunteers, and that experts in many other exhibit booths were very helpful in introducing them to the ways to get started easily.

Many show exhibitors commented how much they appreciated that all the people who attended the OFSC GO Snowmobiling Show were there to talk and shop snowmobiling.

The general feeling was that the OFSC GO Snowmobiling Show brought in serious, qualified consumers who attended to get ready for the upcoming winter.

As one exhibitor said: “At this show, I know that everyone approaching my booth is a good prospect, so I was able to make the best use of my time.”

The OFSC wishes to acknowledge all exhibitors for supporting the Go Snowmobiling Campaign by attending the show. We especially appreciate the ongoing partnership of Arctic Cat, Polaris, Ski-Doo (BRP), Yamaha and show producer, Canadian National Sportsmen’s Shows. We are grateful to the thousands of show attendees whose decision to come to our show proves that the lifestyle and the experience are key to keeping snowmobiling strong and healthy.

The OFSC also wants to thank our volunteers and OFSC and district staff for helping to deliver an exceptional showcase for family snowmobiling in Ontario. See you all next September 25 – 27, 2009 at the 3rd annual OFSC GO Snowmobiling Show, Toronto Congress Centre, 650 Dixon Road!

The Ontario Federation of Snowmobile Clubs is dedicated to providing strong leadership and support to member clubs and volunteers, to establishing and maintaining quality snowmobile trails which are used in a safe and environmentally responsible manner, and to furthering the enjoyment of organized snowmobiling.

Supertrax Onlinehttps://www.supertraxmag.com
Check back frequently for new content and follow us on social media!
Previous articleNine Wins for Yamaha in Snowmobile Grass Drags
Next articleWhere Should I Sell My Sled?