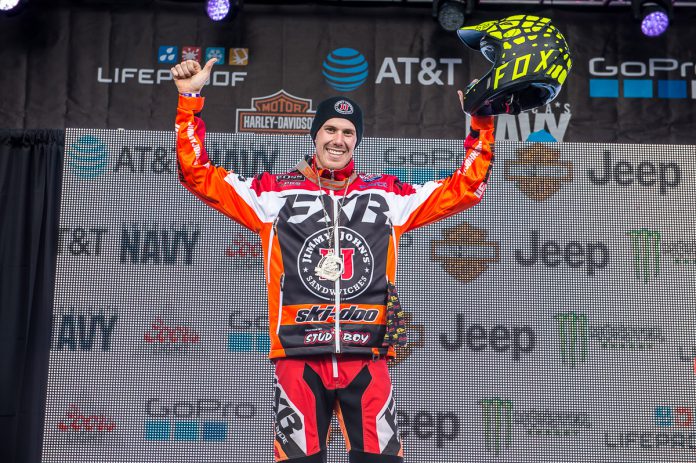 A short course with limited passing opportunities placed a premium on starts at the 2017 Winter X Games and Adam Renheim and his Jimmy John’s Ski-Doo answered the bell with clutch performances in both qualifying and the main event.

“I was a little beat up after blowing a belt and crashing hard in Deadwood,” said Renheim.

We decided not to race there on Saturday and I think it helped coming into X Games feeling fresh. Practice felt good but I didn’t really ride to my true potential in timed qualifying, I didn’t push in some lines and the other guys did and they were a little faster.

With only eight spots available in the main event and no last chance qualifier race to fall back on, it was imperative to finish in the top four positions in the heat race to have any shot at standing on the podium. Renheim avoided the first turn carnage which took place in his qualifying round and raced to a quick lead coming out of the second turn. Securing the win meant an inside starting spot for the final, which would prove to be critical.

When the green flag waved to start the main event, Renheim shot into the lead and raced up Buttermilk Mountain side by side with fellow countryman Petter Narsa. Narsa would gain an advantage after two laps but Renheim stayed in tow as the Swedish riders began to gap the rest of the field. Renheim cruised to a second place finish virtually unchallenged, repeating his Silver medal performance of 2016.

“My heat race was good,” said Renheim. I knew I would have an inside spot in the final and I knew exactly what I wanted to do. I tried to do some passes on Narsa, but each time he would stretch away so I just decided to do my own race. I was hoping he would get tired but the track was so easy. It was still good for the team. It has been easier for me to set up the sled now that we are back with Ohlins. I can speak my own language and they have known me for a long time. It’s too bad the year has not been the best so far but I think right now everything is good.

Everyone on the team can focus on their job and I am feeling 100%.” The team will make a quick turnaround at the race shop in Princeton, Minnesota before heading cross-country to Salamanca, New York for rounds nine and 10 of the national snocross series.