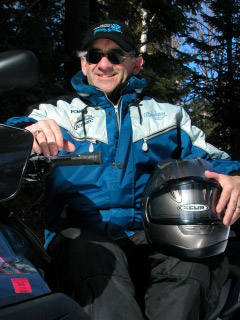 It is with great sadness that we announce the passing of Mr. Laurent Caouette on December 23 at the Centre hospitalier de Saint-Georges-de-Beauce after a lengthy illness.

Mr. Caouette will be remembered as a trailblazer who for 40 years contributed to developing snowmobiling and snowmobile clubs.

Mr. Caouette worked for over 40 years as a volunteer for snowmobile clubs in the Chaudiere-Appalaches region, including Club Linière-Marlow in Beauce, where he was founding president in 1973 and whose territory neighbours that of Maine.

Elected in 1999 as the Chaudière-Appalaches “tourism personality of the year,” he served for over 25 years on many boards of directors, including the Office du tourisme et des congres de Beauce in St-Georges, the CLD de Beauce-Sartigan, Tourisme Chaudière-Appalaches and the Fédération des clubs de motoneigistes du Quebec.

In addition to taking part every year in a number of snowmobiling shows in the United States with Tourisme Chaudiere-Appalaches, including one recently in early December, Mr. Caouette helped raise the profile of snowmobiling in Quebec by representing the province during several media and promotional tours with the Ministere du Tourisme.

He not only received, at the beginning of 2010, an award of excellence from the Ministere du Transport recognizing his volunteer work, he also recently received the 2011 Excellence Award for Outstanding Snowmobiler, an honour bestowed by the Canadian Council of Snowmobile Organizations (CCSO).

“He was a model volunteer and pioneer. He wanted us to continue the work undertaken to develop the regions and this activity that is part and parcel of our leisure and culture. Laurent, you can count on us.”

Snowmobile clubs in the Chaudiere-Appalaches region have petitioned the Ministere des transports in Quebec to name a trail in his honour.

As a result, trail No. 75 running from the frontier of Maine through Chaudiere-Appalaches up to the Quebec region would become the Laurent Caouette trail.