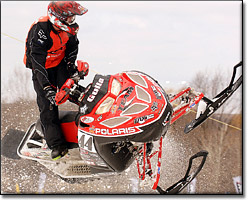 The Polaris racers earned their titles with an incredible weekend of racing at the WSA finale in Lake Geneva, Wisconsin, where Polaris racers on the 440 IQ race sled won eight of nine classes.

“This is an incredible showing by our racers and it proves the outstanding performance of the IQ chassis,” said Polaris Racing Manager Tom Rager, Sr., “I’m so proud of how our racers battled all season and put themselves in position to make this the best year in recent history for Polaris. Best of all, we feel we’re still in the early stages of our racing program’s evolution.”

TJ Gulla of South Hero, Vermont, entered the final race weekend with a 17-point lead in Pro Stock standings, and he stretched the margin to 23 points as he won the title ahead of runner-up and fellow Polaris racer D.J. Eckstrom of Duluth, Minnesota.

“The competition is fierce in the Pro classes but TJ was consistently strong and determined and had a great season,” said Rager. “He truly deserves his championship, and we’ll continue to look for great things from him.”

The surprise winner of the weekend’s Pro Stock racing was Ross Martin, who moved up from Semi-Pro to Pro at the final event since he had secured his two Semi-Pro crowns earlier in the season. Martin jumped the gun and had to start at the back of the pack for the weekend’s final Pro Stock moto, but he completely dominated the competition on his 440 IQ and took the checkered flag for his first Pro-class victory.

Martin, who is from Pleasant Prairie, Wisconsin, won the weekend’s Semi-Pro Open racing to pad the margin of his season points title. He skipped the Semi-Pro Stock racing for the weekend to jump up to Pro Stock since he had previously clinched the Semi-Pro title.

“Ross represents the very positive growth and development of the young racers we have brought into our racing program the past few years,” said Rager. “He has developed into a great competitor and as he showed at Lake Geneva in Pro Stock, he should do very well when he moves up to the Pro classes full-time.”

One of the weekend’s most dramatic developments was the incredible effort of Polaris pilot Julie Thul in the Pro Women’s class. She entered the weekend one point behind the season’s points leader, but finished third and first in her motos to win the weekend title and clinch the Pro Women’s championship by a 9-point margin. Thul, who is from Chisholm, Minnesota, set the pace for fellow Polaris racer Amanda Wolfe of Burlington, Wisconsin, who finished third in the season’s points standings.

“Julie never gave up, never stopped riding her hardest all season and it paid off with a very well-deserved points title,” said Rager. “She raced smart and raced hard and we are extremely proud of her.”

Polaris racers in all classes showed off the outstanding performance of the 440 IQ and the all-new IQ chassis. Along with the winners named above, other Polaris racers who were winners at Lake Geneva included Earl Reimer, who won the weekend’s Pro Plus 35 title; Polaris racer James Keillor took third.