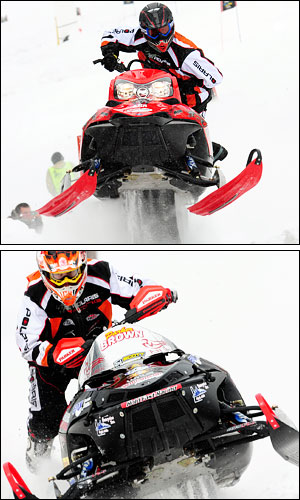 Curtis led the way as Polaris racers won 60% of the event’s Stock class titles and 40% of all the Pro classes during the event held March 27-30.

He proceeded to win the “Stock King of the Hill” title, and then advanced to the battle for the ultimate honor of “King of Kings.”

Competing against the Improved Stock and Mod class Kings, Curtis and his stock 800 RMK Dragon demonstrated real Polaris “Winning Performance” as he reached the summit of Snow King Mountain in just 1 minute, 8.628 seconds to earn the top honor at the sport’s most historic and prestigious hillclimb.

Polaris hillclimber Parker Brown set a new record for fastest run to the top of the mountain. Brown won the Mod 800 class by reaching the top in just 56.419 seconds – several seconds faster than the times of this year’s Kings of the Hill and the fastest summit run in Jackson Hole history.

Polaris hillclimbers who won class titles at the 2008 World Championship were:

RMKs are easily prepped for hillclimb competition, and as Keith Curtis demonstrated on his stock 800 RMK Dragon, stock RMKs are more than capable of outperforming modified competitive sleds.

Polaris hillclimber Dolan Phelps earned three podium spots at the World Championship with a second in Improved Stock 700, second in Stock 800 and third in Stock 1000.