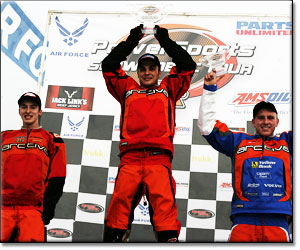 What a weekend for Arctiva Winter Clothing and Z1R helmet sponsored racers!

Led by winning Hentges Racing driver Bobby LePage, followed by teammate Brett Bender in second, and always competitive Andrew Jonstad of Avalanche Racing in third place, it was a great battle to the finish to cap an exciting Saturday of racing.

In Women’s Pro Super Stock on Saturday in an incredible effort, Avalanche Racing’s Kylie Abrahamson went from falling off her machine at the start of the race to come from the very back of the field and catch Sarah Mc Question for the win. Both riders are sponsored by Parts Unlimited and it’s Arctiva Apparel and Z1R helmet brands.

The Pro Mens finals saw both teams place racers on the podium.

In Pro Super Stock Avalanche racing’s Mike Schultz made the podium with a third place finish.

Sunday brought more success for Hentges racing in the Semi Pro Stock class.
Brett Bender and Bobby LePage battled it out with Brett taking 1st and Bobby placing second for their second podium appearance of the weekend.

With all the great results from our sponsored racers, it just goes to show that “Winners wear Arctiva & Z1R!”

Supertrax Onlinehttps://new.supertraxmag.com
Check back frequently for new content and follow us on social media!
Previous articleYamaha Factory 4-strokes: Round One In Duluth
Next articlePolaris Switchback 600: Off-Trail Handling