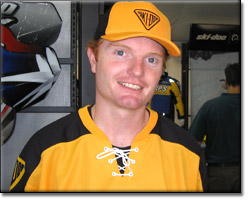 The big question Ski-Doo race fans are asking is this: Will Blair be 100% to start the WSA season at the Thanksgiving Duluth Spirit Mountain National?

After a disappointing injury last season that left him with another broken leg only one season after recovering from a similar injury, Morgan was sidelined early last year leaving herds of die-hard fans pining for the famous 7c.

Reports indicate Morgan campaigned successfully this summer in Canadian National CMRC motocross and as of this writing he was still in contention for a title.

Some observers say Morgan looked less like himself than past summers but still garnered a powerful presence whenever on the race track.

Supertrax Onlinehttps://new.supertraxmag.com
Check back frequently for new content and follow us on social media!
Previous articleRace Ready: Yamaha
Next articleThe 12 Most…