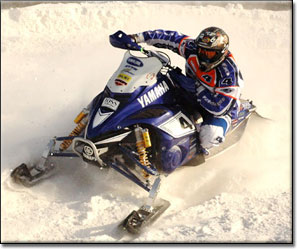 Robbie Malinoski and Yamaha topped off an historic weekend at Brainerd International Raceway Sunday. Malinoski won the Pro Open final, part of the WPSA PowerSports Snowmobile Tour Polaris BIR Championship, and, in the process, he gave Yamaha’s new snowmobile its first victory. In fact, it was the first victory ever for a four-stroke-powered snowmobile in national Snocross competition.

Malinoski (No. 4 Yamaha) dominated the 20-lap event. After grabbing the holeshot, the Humboldt, Saskatchewan native led every lap, earning the defending Pro Stock and Pro Open champion his first victory this season. Shaun Crapo (No. 3 AMSOIL/Polaris) finished second, marking his first podium of the 2006-2007 Tour. Steve Martin (No. 18 Dodge/Ski-Doo) too, earned his first podium, finishing third.

Malinoski said he knew his Boss Racing team was competitive, but he was surprised by a victory this early in the season.

“It feels good to get Yamaha up here and give a four-stroke snowmobile it’s first victory,” said Malinoski. “I never counted out a win. I knew it would be tough, but anything is possible with hard work. We’ve worked very hard on this, trying to get it right. This is a quick start. We’re going to improve on this and see where it goes from here. This is the start of a new beginning.

“It’s great to make history,” added Malinoski. “It feels really good, but now we have to put our heads down and improve upon it.”

Malinoski said the Yamaha’s differences from other snowmobiles worked to his benefit.

“The sled is a lot different,” continued Malinoski, who rode an Arctic Cat last season. “That engine is so powerful—It’s all Yamaha!”