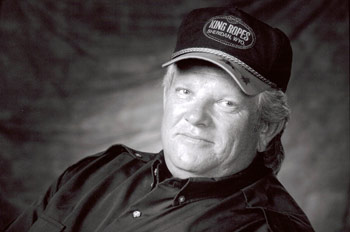 The oldest of three sons, born in Toronto in 1954, John established Promark Motorsport International and Raceline Motorsport Television in the late 80’s to fill a void in the televising of Canadian racing events.

A year later, Massingberd launched Snow Trax Television which is now in its 14th year and is broadcasted nationally in both Canada and the United States. In 2004, Dirt Trax Television, a companion program focusing on the All-Terrain Vehicle market, was launched and has reached similar acclaim with North American enthusiasts.

Massingberd’s energy, infectious sense of humour and genuine charm is what contributed to John’s larger than life persona. His unique vision, business acumen and strong sense of dedication is what drove him to break new ground in the televising and radio coverage of Canadian motorsport racing and the world of snowmobiling and ATV recreation.

His efforts and legacy have been submitted to The Canadian Motorsport Hall of Fame for induction consideration. A special memorial ALS snowmobile ride in John’s name is also planned for this winter season. All proceeds from the charitable ride will be donated to help family’s whose loved ones are stricken with ALS.

A reception to celebrate Massingberd’s life is in the planning process, as is a special tribute broadcast on The Raceline Radio Network. A series of special segments celebrating John’s most memorable experiences as host of Snow Trax Television is also planned for this broadcast season.

Under the management of a dedicated team of individuals, the properties of Raceline Radio, Snow Trax Television and Dirt Trax Television will continue to strive forward and break new ground in delivering entertaining and content rich programming to Motorsport and Powersport enthusiasts alike.

We all sincerely appreciate your thoughts, prayers and condolences. In lieu of flowers please make a donation to the ALS Society of Ontario or your local Snowmobile Club.

Supertrax Onlinehttps://www.supertraxmag.com
Check back frequently for new content and follow us on social media!
Previous articleThe Truth About 800 Polaris CleanFire Revealed
Next articleSnowmobiling – The Way to Vacation Close to Home