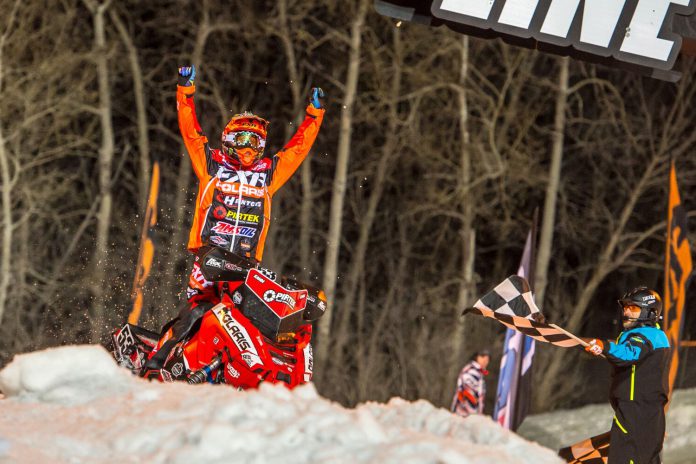 Kamm entered the weekend second in points, 28 points out of first. ISOC also awarded five bonus points for each heat-race win during the season. Kamm took full advantage by winning all six heats this past weekend, earning him an additional 30 points. He won the Pro Open finals on Friday night and Sunday, and finished second in the Saturday final.

“I had lot of ups and down this year. I separated my shoulder and thought I was done after that, but I won my first race back,” Kamm said after receiving the champion’s red number plate. “This weekend I felt great, no shoulder pain at all. This is a dream come true.”

In 17 finals this season, he reached the podium 10 times with five wins, two seconds and three thirds. In winning his first Pro Open title, Kamm dethroned Tucker Hibbert, the four-time defending champion who had won five of the previous six titles.

For the season, Angove had three wins and nine podium finishes, including seven in a row in the second half of the season. Joining him in the top 10 in points were Lorenz in third, Mason in fourth, Cole Cottew (Cottew Motorsports) in sixth and Evan Daudt (Daudt Racing) in seventh.

In the final two rounds of Pro-Am Women’s racing, Elina Ohman (Davies Racing) of Älvsbyn, Sweden, won two of four heat races and finished second in one final to easily secure the season points title. She won 14 of the season’s 16 finals, and 27 of 32 heat races.