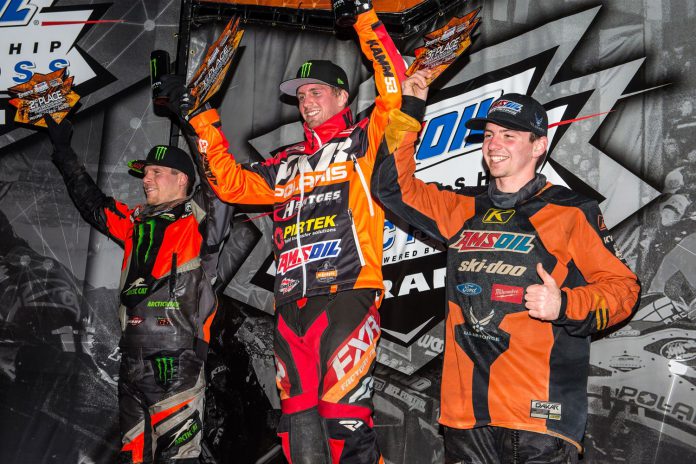 After winning both heat races and the final on Saturday, Kamm strengthened his hold on second in the points standings. In Pro Lite, Jake Angove (Judnick Motorsports) had a win and a third to remain second in points with a shot at winning the title at the ISOC season finale.

Polaris Pro-Am Women racer Elina Ohman (Davies Racing) won three of four heat races and both finals in Iowa and remains perfect with 14 finals wins this season. With wins in 25 of 28 heat races, she has won 92 percent of her races this season, and is poised to clinch the points title.

In Friday night’s Pro Open final, Kyle Pallin (Team LaVallee, Loctite, Polaris, Red Bull) finished second to reach the podium while Kody Kamm showed promise with a heat race win, but then finished 13th in the final. Kamm was unstoppable on Saturday, winning both heat races, then grabbing the holeshot and taking the win in the 18-lap final. Pallin, once again, ran strong and finished fourth, as five Polaris racers earned top-10 finishes.

In the Pro Open points race, Kamm is in second and he extended his lead over third place with his win. Joining him in the top 10 are Petter Narsa (Hentges Racing) in fifth, Ross Martin (Judnick Motorsports) sixth, Kyle Pallin seventh and Corin Todd (Leighton Motorsports) eighth.

In the points standings, Angove is second, Lorenz is third, Mason is fourth, Daudt is fifth and Cole Cottew (Cottew Motorsports) is sixth.