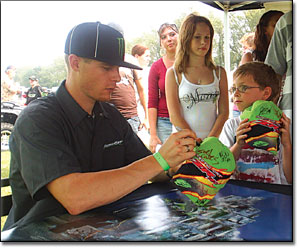 Tucker has committed to racing about half of the WPSA National Tour (when there are no conflicts with his AMA motocross racing program) and will certainly participate in ESPN’s legendary X-Games snocross competition.

Hibbert left Team Arctic three seasons ago amidst a cloud of controversy. Some believed management personality conflicts were at the core of Tucker’s way-too-early retirement.

With what appears a complete housecleaning in the legendary halls of the Arctic Cat Race Shop and the installation of Russ Ebert as AC Racing Boss, it may be time for Tucker to return to dominance in the sport.