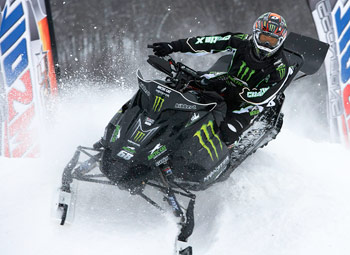 Tucker Hibbert continued his win streak in the still young AMSOIL Championship Snocross Season, picking up where he left off in Duluth winning both Pro Main Events driving away.

This time however it didn’t come without effort, especially in the Pro‐Open showcase race as Hibbert spun at the start and emerged mid‐pack at the close of the first lap.

The Bad River Lodge and Casino National featured a long .5‐mile track with multiple elevation changes and two dramatic up and down hill runs.

Described by competitors as a national motocross type track with multiple lines and passing opportunities, virtually every final featured intense racing throughout the pack.

Such was the case in the Pro‐Open main event, as a string of talented Polaris riders led early but were eventually hunted down by Hibbert.

In the early going it was Brett Bender with the holeshot and lap‐one lead only to be ejected while “bombing” the downhill portion of the track. This opened the door for fellow Polaris pilot TJ Gulla, followed by Ryan Simons on his Arctic Cat; Levi LaVallee on a Polaris and Ross Martin also on a Polaris.

But soon Hibbert was on the gas, picking off riders with spectacular set‐ups and passes. Averaging lap times as much as a second faster than his fellow competitors, Hibbert took over the lead by lap 8 and then proceeded to post taillights for the remainder of the 20‐lap final. At the checkered it was Hibbert followed by the Polaris duo of TJ Gulla and Levi LaVallee.

Rounding out the top five was the much improved Arctic Cat pilot Garth Kaufman and last year’s Pro Open year‐end champion Ross Martin. Factory Yamaha made their first final of the year in Ironwood, and Steve Taylor turned in an impressive 8th place finish. Ski‐doo’s top finisher was Dave Allard in 11th.

“I spun at the start,” said Tucker after the race. “I wanted to get out front early because the snow dust was pretty bad. I saw TJ and Levi were starting to pull away and I knew they were gonna be tough to pass so I didn’t want to waste time. I found some really good lines which allowed me to catch them before they got away.”

Earlier in the day, Hibbert won the Pro‐Stock final in a more familiar fashion – nailing the holeshot and riding away in the 20 lap final. Early on fellow Arctic rider Ryan Simons rode a strong second but a lap six bobble bounced Simons back to fourth, as TJ Gulla and Levi LaVallee slipped by.

While Tucker proceeded to checkout, Levi pressured his teammate Gulla and at the halfway mark Gulla was bounced on a downhill portion of the track. That allowed Levi to slip by and moved Polaris rider DJ Eckstrom into third while Simons hung onto fourth.

The top four remained the same for the remainder of the race, but a great battle shaped up behind them, as the Polaris trio of Ross Martin, Shaun Crapo and Brett Bender battled in a tight‐knit group with Martin eventually picking up the fifth place finish at the line.

After the race Levi commented on the battle between Gulla and himself. “TJ was flying,” said LaVallee. “Once I got behind him I was pushing him pretty hard as we were doubling on the downhill. Then he just snowballed and I had to check‐up… he’s pretty sore but I’m glad he’s okay.”