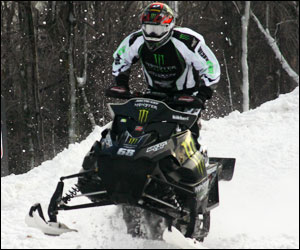 When the all-new Sno Pro 600 was announced to the world last Fall, Arctic Cat warned the competition they were releasing an entirely new weapon.

True to their word, that all-new 600 Sno Pro unleashed a serious butt-whoopin’ on the competition this season in the USCC cross-country series and now, the WPSA snocross national series.

As recently as a couple weeks ago, DJ Ekre wrapped up the USCC Triple Crown title while Team Arctic riders aboard the Sno Pro 600 swept the Pro Open Classes through fourth place, as well as the Semi Pro classes.

The Sno Pro can hang one more championship plaque from its hood as Tucker Hibbert wrapped up the WPSA Pro Super Stock Championship this past weekend in Lake Geneva, WI.

Hibbert went into the weekend in third place in Pro Super Stock, nine points behind the leader.

He needed a near perfect weekend in order to win the points and perfection was what Team Arctic got from him. He proceeded to sweep the entire weekend, winning all his heats, both finals and taking home the points championship. Team Arctic rider Matt Piche also landed the first Pro podium finish of his career, backing Hibbert up with a third place finish in the first Pro Super Stock final of the weekend.

Tucker stated, “I’ve had a really fun season! When I have fun, I really do well. The Sno Pro 600 has been awesome. I’ve said it before, I’ve been able to maneuver this sled and tackle the track in a manner that I haven’t been able to on previous models. Something I think all Team Arctic riders have experienced. I would like to thank all my fans, you guys are the best in the world, and I really appreciate your loyalty!”

Another stellar season performance was logged by Wes Selby as he finished seventh in Semi-Pro Stock points having competed in just five of seven events. Other winners at Lake Geneva included Cody Thomsen in Sport Super Stock 2 and Taylor Carlson in Sport Women.

“The 600 Sno Pro more than lived up to our expectations for a first-year race sled, but our riders are also top notch.” said Team Arctic Race Manager Russ Ebert. “It’s our job to work with engineering to make the best sled possible so these racers can use their talent to go out and win on it, and that’s exactly what they did. We look forward to next season by adding a few more championships.”