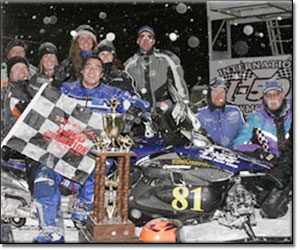 For the second consecutive year, a Yamaha Apex snowmobile has won the prestigious Soo I-500 endurance race in Sault Ste. Marie, Mich. The winning team of Chad Gueco and co-driver Bill Wilkes simply dominated throughout the entire event on Saturday, Feb. 3.

Last year’s winner Corey Davidson, driving with Travis Hjelle and Troy Hanson, put another Apex on the podium in third. Filling out the top five for Yamaha was the Loshaw Racing RX-1 of Shawn Ritchie and Terry Wright.

Gueco set up his Apex’s suspension for the rough conditions expected during the scheduled 500 miles, and although he qualified only 11th, he knew the powerful Yamaha would still handle well when conditions deteriorated.

Still the competition was fierce – much of the strongest was from other Yamaha teams – and the Gueco Racing Apex ran in the top three for most of the first 200 laps.

The only mechanical issue occurred at the 200-mile point when the team pitted to replace an idler wheel. But they reclaimed the lead and had built up nearly a lap advantage when the event was red-flagged on lap 367 for a fast-moving snowstorm.

Gueco and Wilkes were declared the winners while Davidson, Hjelle and Hanson, charging hard in third, simply ran out of time. Moving up field after receiving a stop-and-go penalty, they had un-lapped themselves and were chasing down the leaders when the race was stopped.

“I have always loved endurance racing because it’s a challenge, a strategy game, trying to outsmart the other racers,” Gueco explained later. “Yamaha builds a great sled and the Apex four-stroke engine never missed a beat the whole race. This thing has so much steam down the straight-aways! It pulled the same rpm every lap and we never had to worry about the engine at all.”