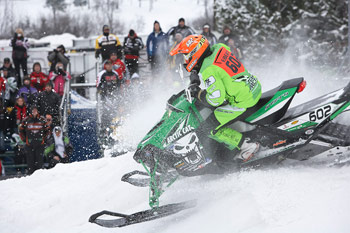 Arctic Cat pilot Dan Ebert capped his first major race of the season with an emotional victory in Semi‐Pro Super Stock this past weekend during the Bad River Lodge and Casino National in Ironwood, Michigan.

Ebert snared the lead on the first lap of the 15‐lap final and didn’t look back, while his teammate Cory Davis kept pace for a one‐two punch at the finish.

Completing the box at the final was Polaris rider Ryan Carey, who scored a second place finish in Duluth. Ryan held off a hard charging Tim Tremblay of Quebec at the line on the last lap giving him the final podium position.

The final wasn’t so smooth for top qualifier Christian Salemark of Sweden, who holeshot the pack but had a lap‐one “get‐off” shuffling him back to tenth.

Salemark then proceeded to post the fastest laps of any racer in the main event, eventually working his way back to fifth at the line. The victory for Ebert was an emotional one.

Unable to compete at Duluth due to a wrist injury, Ebert competed at Ironwood with his wrist heavily wrapped giving him limited movement and range. It appeared to have little impact.

“This is unbelievable,” said Ebert during the post race celebration. “My goal was to just make the final this week, I can’t believe I won it!”

In the Semi‐Pro Open ranks, the roles were reversed as Ebert nabbed the holeshot and it was top qualifier Salemark who emerged in fifth midway through the first lap.

However early in the race Ebert over‐shot a berm near the top of the track relinquishing the lead to Ski‐doo pilot Paul Bauerly.

But soon it was Salemark once again posting the fastest laps on the track and by mid‐race claimed the lead from Bauerly. Behind them it was Ebert and teammate Cory Davis swapping positions throughout the second half of the race followed by Ryan Carey on a Polaris and Bobby LePage also on a Polaris.

In the final laps, Ebert finally took over the final spot on the box from Davis for good as LePage did the same to Carey to round out the top five.

“It was nice to be out front early,” said Bauerly after the race. “Dan (Ebert) gave me a bit of gift when he went off the track, but Salemark ran a good race and was just too fast for me today.”

Christian Salemark who made the trek to North America to compete for the entire season in the AMSOIL Championship Snocross Series commented on the challenges of coming from another country to compete.

“It’s not easy,” said Christian. “I’m thankful for all the people who have helped me since I’ve arrived. It has been a lot of fun so far.