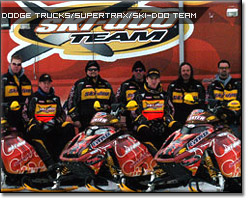 No sooner had the #1 plate and trophy been loaded in the Team Arctic OSSTF trailer than Hayden announced he would return to Ski-Doo for the 2006 season racing for the Factory Recreation/Royal Distributing Team.

In what seemed like a bizarre twist – Michael Vandolder, heir to the Vandolder oval racing legacy and genetically implanted with Ski-Doo chromosomes, moved to the OSSTF Team Arctic Cat trailer from the Factory Recreation Royal Distributing Team.

The constant in the Pro Class moving into the 2006 season is clearly the Dodge Trucks/Supertrax/Ski-Doo Team led by this magazine’s AJ Lester and Matt Turner.

Supertrax Onlinehttps://new.supertraxmag.com
Check back frequently for new content and follow us on social media!
Previous articlePolaris Puts Money To The Trails
Next articleIRL Meets Sno-X