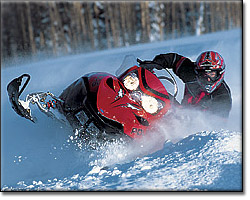 Polaris new IQ 900’s have been getting a lot of attention at dealers since the first units arrived in late October and early November.

The first few hundred Fusion 900’s were subject to a “Stop Sale” notice due to a potential problem with the IQ’s radical hollow drive axle. In fact – only one axle failed in actual testing. However, Polaris was concerned with product safety on the new sleds and didn’t want to take any chances so new axles were shipped to the handful of dealers who received early production units. The balance of the sleds were all given new axles by Polaris.

When we toured the factory in late November we witnessed ongoing strength and hardness testing on axles destined for Fusion’s and RMK’s.

Supertrax Onlinehttps://new.supertraxmag.com
Check back frequently for new content and follow us on social media!
Previous article4-Stroke Stoke
Next articleNew Doo?