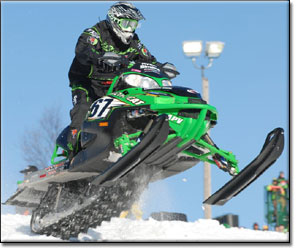 It took Ryan Simons about 3.5 years racing in the Pro ranks before he notched his first National win, which came February 23-25 in Eagle River, WI. It took him exactly one more week to earn his second title.

The 24-year-old – who also added a third in Round I Pro Open and now has seven podiums on the campaign – led a balanced Cat attack that featured a slew victories.

Among those who topped the box was Simons’ HJ Racing teammate Cory Davis, who scored his first-ever Semi-Pro win in Round II Semi-Pro Open. “Cory’s been lightning fast in qualifiers, and I knew he was capable of winning,” said Arctic Cat Race Manager Russ Ebert. “He’s a great kid who comes from great racing stock, and I’m not at all surprised.”

Davis, an 18-year-old from Soldotna, AK, is the son of Scott Davis, the seven-time champion of the legendary Iron Dog cross-country race. Cory’s younger sister, Carly, also took a solid 5th in Pro Women at Canterbury, her National series debut.

“It feels awesome to get my first win because I’ve been working at it for a while,” said Cory, who completed his career weekend with a third in Canterbury’s Round I Semi-Pro Open. “I couldn’t ask for a better team, and watching Ryan do so well has been very motivating. What we’ve got going on here with HJ and Arctic Cat is terrific.”

Terrific also describes Matt Piche’s weekend. Despite racing with a painful pin and screw in his right hand, Piche stayed strong throughout the long event. The 21-year-old claimed the checkered in Round I Semi-Pro Stock action for his first win of the season and also finished second in both of Canterbury’s Semi-Pro Open finals.

Piche narrowly beat fellow Cat man Wesley Selby to the line in Semi-Pro Stock. “Our motors and sleds have been working so well all year that I thought a win was just a matter of time,” said the Christian Brothers driver. “It was fun to race with Wesley; he’s been riding great lately and it’s good to see him at the front.”

Kyle Pallin scored the top spot in Sport Open and added a third in Sport Stock behind his brother Josh, while Dusty Miller took yet another Sport-class top-three. Cody Thomsen successfully defended his Junior 14-15 victory from the week before and, just for good measure, stepped up a class and won Junior 16-17, too.

Supertrax Onlinehttps://www.supertraxmag.com
Check back frequently for new content and follow us on social media!
Previous articleMileage on Yamaha 4-strokes
Next articleBRP Partners With University of Sherbrooke