Arctic Cat All About Speed 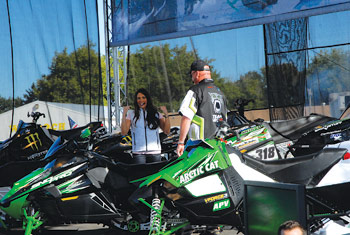 Arctic Cat was all about speed at Hay Days. A full-on rock stage held three sleds Cat was hanging “World’s Fastest” handles on.

Not surprisingly, it took top billing at AC’s Saturday morning unveil. Next was the new, limited build HCR M-8 rooster. HCR stands for Hill Climb Racer and, whether it’s the fastest in that discipline or not, it looked seriously light, trick and powerful.

Finally, the limited build 600 Sno Pro was unveiled to roars of applause. The new Sno-X and XC weapon from AC is refined again for 2009 boasting a complete engine re-working to fulfill Cat’s ongoing quest for more power.

The entire “World’s Fastest” theme was a home run with the crowd and demonstrated a momentum shift is underway in Thief River Falls.