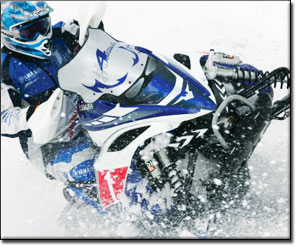 On January 27, the first round of the 2008 All-Japan Snowmobile Championships was held at a special course set up at Yuzawa (Niigata Pref.).

In heat one Shinji Tozawa got the hole shot and Nobuaki Eikura followed in 2nd place to prove immediately the stunning performance potential of the new Yamaha machine. On the first lap Eikura took the lead with Tozawa close behind, and through the early stages of the race these two Yamaha riders battled one-on-one in the lead.

On lap five, Tozawa moved past Eikura into the lead again, only to have Eikura and Hironori Hayashi (S) pass him on lap seven. On lap eight, Tozawa was also passed by Tomonori Matsuda (A) and from that point on the race developed into a three-way contest between Eikura, Hayashi and Matsuda.

Later, when Matsuda moved into 2nd position, a tight battle raged between Eikura and Matsuda from that stage. Matsuda tried using a variety of lines through the curves to get past Eikura, but the Yamaha rider always managed to keep ahead with skillful blocking lines.

Throughout the head-to-tail battle that went on and on, Eikura’s strength and concentration never waned, as he rode on to victory in the first race of the season. Matsuda finished 2nd and Hisashi Hashiba (S) finished 3rd.

After riding through the middle stages of the race in 4th position, Tozawa lost further ground to finish heat one 11th place. Yamaha riders Masafumi Terasaki and Daishi Takamura got off to slow starts and finished 10th and 12th respectively. Another Yamaha rider, Kiyotaka Kawagoe failed to qualify for the finals due to a mishap in the qualifying.

In the second heat Tozawa once again got the hole shot and Eikura followed in 2nd place, giving the Yamaha Racing Team another 1-2 start. In the early laps, Tozawa maintained his lead with Eikura close behind until Matsuda came in between them to make a bid for the lead, as in heat one.

Things changed on lap six, when Eikura slipped past Tozawa into the lead. Matsuda also got past Tozawa on lap seven and moved up on Eikura’s tail to turn the race into a replay of heat one. It was also a battle between the lighter 2- stroke machine of Matsuda and the more powerful 4-stroke Yamaha “FX Nytro” of Eikura.

To the end, Eikura made skillful use of that power to stay in the lead to the finish and win the second heat and the day’s overall victory. Matsuda finished 2nd and Hashiba (S) finished 3rd to put the same three riders on the podium as in heat one.

Tozawa again lost ground in over the second half of the race and finished 8th. Yamaha riders Takamura finished 9th and Terasaki finished 11th.