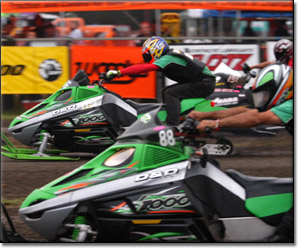 Haydays has come and gone, but the 2007 Arctic Cat F1000 is here to stay! Some diehard fans claimed the new F-sleds would never replace their beloved Firecat F7 in a speed race.

Others said the new F-sleds couldn’t touch a competitor’s 1000. Wrong! In the highly anticipated Stock AAA Open race, the proof is now in the race books; the F1000 is the new king.

During the past four years, the Firecat F7 dominated drag racing venues across the country. At the recent Haydays grass drags, the Stock AAA Open final paired two F7s against two new F1000s in a 500 ft. grudge match.

Both drivers of the F7s cracked off an extremely quick reaction time, but the 1000s had tripped the 60 ft. lights quicker, continuing to pull down the track.

Al Shimpa, Drag Race Coordinator for Arctic Cat, credits the F1000s massive midrange torque for its dominating results: “There’s no arguing with 125 ft.-lbs of torque. Consumers and racers can expect great things from the new F1000 motor. It is extremely stout and produces more than enough torque and horsepower to beat your buddies.”

For more information on the 2007 line of Arctic Cat snowmobiles, please visit your local dealer or log on to ArcticCat.com.

Supertrax Onlinehttps://new.supertraxmag.com
Check back frequently for new content and follow us on social media!
Previous articleFactor In Law of Averages
Next article2007 DENNIS KIRK SNOW CATALOG