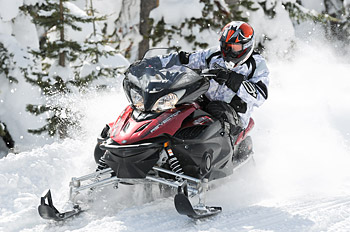 Yamaha is in a price crunch situation and needs to provide its dealers with sleds that are competitively priced.

Since the pipeline of one and 2-year-old sleds has pretty much been sold off, even lower volume sellers like the Phazer are in short supply.

Yamaha’s biggest strength is its engine repertoire and it has two fantastic engines that are becoming very obscure in its line-up.

First, the 120-horse carbed Vector triple is a clean, fuel miserly engine that is only being used in a couple of formats, the Viking and the original Venture 2-upper.

Dropping this mill into the existing Vector along with price-downs like a simpler gauge and handlebar heater package and using steel bodied gas cell shocks up front with a non-damping-adjustable gasser in the monoshock skidframe would enable Yamaha to price this sled against mainstream 600 2-strokes.

We think further cost reductions could be gained by modifying the seat, rear exiting exhaust and the lug depth of the track.

An alternate version or even one to sell alongside the carbureted Vector would be a Vector version with the Phazer’s 80-hp 4-stroke twin underhood.

This could work with the above downgrades and produce a second lower cost answer, considering the Phazer is getting a bit long-in-the-tooth.

If Yamaha does continue with the Phazer in 2013 we think it will be in one model version only, the SE.

Likewise we see the Nytro 121-inchers being pared and the XTX and mountain versions remaining.

Yamaha will stick with its EPS program but it will not be offered in more models than last year.

Yamaha’s new Tuner Dual-Runner skis will be offered standard on all Vector, Venture and Apex models.