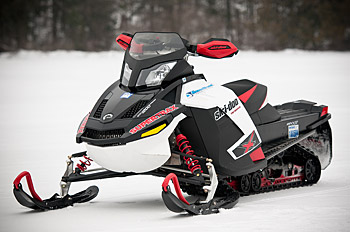 For 2011 Ski-Doo morphed “Renegade” into it’s own brand. In other words, it’s no longer an MX-Z Renegade, it’s just Renegade all on its own.

Yes, all Renegades use the XP/XR chassis just like the GSX and GTX models use identical basic platforms for both 2-strokes and 4-strokes.

We believe Ski-Doo was wise making Renegade stand on its own as the X-Over thing continues to develop multiple identities. Again, the term is still not fully defined. In Ski-Doo’s case, the company is certainly attempting to cover every possible interpretation of what the “thing” might finally become.

In this case, the XR 4-TEC 4-stroke platform has been dipped in an X-package using a 16×137-inch sneaker, allowing Ski-Doo to explore some new turf.

This year the XR 4-TEC is looking like it wants to take on both bumpy trails and some boondocking as well as deep snow honing on lakes.

From a power perspective we applaud this 1200 but with some hesitation, literally. The 1170cc Rotax triple uses twin cams and some nice technology in the valve train to develop what is actually, according to the EPA’s own website, more than the claimed 130 ponies in the Ski-Doo brochure.

Seems the EPA’s dyno believes there’s almost 140 stallions available and for the record, we concur. In fact, since the first time we took a 4-TEC up Kevlar Lake at WOT we felt the 130 number was conservative.

To provide some contex, lets say it this way: The XR 4-TEC will outrun a Yamaha Nytro, a Vector and will stay scary close to 2010’s 150 HP Apex.

With this much power on tap the only other question that must be answered to qualify this Renegade as a more “purist” X-over than a mogul planer, is weight. Clearly the XP Renegade chassis fitted with either a 600 or 800 E-TEC mill is fully on the other side of the crossover equation.

Those lightweight, ultra powerful 2-strokes are capable of any kind of boondocking, freeriding or deep snow activity you can throw at them. When it comes to the XR variant with a heavier 4-stroke mill, the answer becomes less clear.

Note, we did not say the XR couldn’t boondock. However, it is heavier – significantly so than either of the E-TEC powered Renegades.

There’s more affecting our conclusion on the XR Renegade’s true calling. It has to do with the 1200 triple’s predisposition to low RPM throttle lag.

Yep, we’ve discussed it before on these pages and we can’t let it go unreported. Why? When running deep snow instant throttle response is mandatory.

There’s nothing worse than throwing a sled on its side in deep powder while grabbing a handful to find the engine is hesitating – waiting to grab Kevlar.

Sure, you can counter this trait with deft throttle pinching but we’re pretty sure no one who rides the deep would prefer laggy throttle response.

The other issue, 4-stroke weight, is somewhat neutralized by Ski-Doo’s XR chassis. The Renegade 4-TEC is lighter than any competing 4-stroke X-Over in this class.

This says a lot and it may be enough to get you on a 4-TEC Renegade X if your goal is deep snow riding rather than trail riding.

The XR Renegade’s 137×16 sneaker produces a footprint actually a few square inches larger than a 144×15. As a result of the skid’s shorter length the Renegade displays the least track-length induced understeer of any of the sleds we’ve tested here.

Handling on hardpack, the X Renny is hard to discern from a 120 inch XR. Initial turn-in is very precise and the sled holds a laser-guided line in the twisties.

When a few inches of fluff piles up on top of hardpack you’ll know you’ve got a 137 out back but the resultant understeer is manageable.

The XR 4-TEC Renegade X is a superb trail tool able to bridge moguls and carve apexes with the best of the 120/121 crowd.

It’s also fully capable of running deep snow on lakes and occasionally transferring its talents into the free-ride/boon-docking genre.

While the sled is not a 100-percent serious freerider-boondocker, it can play in the deep and stay afloat with a considerable measure of credibility.