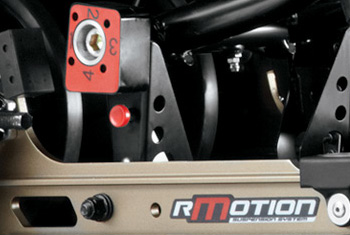 Honestly, we didn’t think the current XP/XR rear suspension in either 120 or 137-inch variants – the SC-5 -was in need of any major re-working. Were we ever wrong!

Ski-Doo has gone back to the drawing board with a new skid design (available only in 120-inch lengths in next year’s MX-Z X and XRS packages).

What is “R-Motion”? While it wasn’t really discussed at our early intro we think the ‘R’ is for “Rising Rate” and in a strange sort of way it would seem Polaris has made rising rate an issue in the biz right now.

Ski-Doo will never let anyone mow their lawn and to this end they’ve gone back to the drawing board in skidframe design and have not only produced a new rear suspension that offers true rising rate response from the shock but have done so while keeping the shock in the skid, something Polaris has made pretty clear can’t be done.

This argument is likely to go on for some time as Polaris does have some traction in their assertion.

The new R-Motion clearly has true rising rate response when measured at the shock however the torsion spring rate does fall off slightly at the end of the skid’s travel. Doesn’t matter as we had the opportunity to ride the new R Motion just one week ago and came away extremely impressed.

The new skid offers up significantly more rail travel but does not increase the sled’s static height by one millimeter!

This has been accomplished through the use of very techy packaging when the skid is fully collapsed. The secret was getting the skid to collapse further into the XP’s tunnel. The new R-Motion skid keeps the XP just one inch off the running boards at full collapse.

There’s more. The R-Motion uses what has to be the longest front (torque) arm we’ve ever seen. The front arm actually intersects the rails at a point that appears to be more than 50 percent to the rear of the actual rail extrusions.

This long front arm allows the skid to have more uncoupled movement to absorb jigglers while producing some of the nicest weight transfer we’ve seen in over 15 years. The XP can be throttle modulated into and out of turns with as little or as much ‘wheelie’ as you wish. Nice.

Other features of the R-Motion is an available (Spring Break only) remote rear torsion spring preload adjuster using a slick hydraulic pump mounted on the running board on the left side.

Turning a large – gloves on – knob pushes oil through a braided steel hose into a nifty little hydraulic ram that cradles the torsion spring pig tails – effectively moving them up and down, creating more or less pre-load.

The other running board (right side) has a similar fixture thatt contains a gloves-on clicker knob to adjust rear arm shock compression damping. The knob is actually mounted on the shock’s remote reservoir connected to the rear damper with another braided steel hose. Again, nice.

How does it all work? The ride is quite honestly as smooth as Philly cream cheese. Like riding on a cloud. Ridiculously plush yet difficult to bottom even with minimum spring preload. Ski-lift is not amplified but actually better controlled than with SC-5.

We’ll have much more in the Supertrax Zinio on line edition in March.