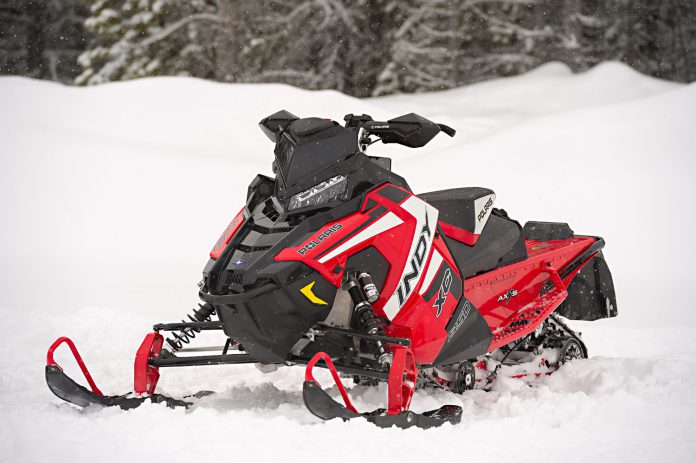 Polaris shocked us when it pulled the sheets off the new 850 by claiming all 2019 Polaris snowmobiles with 850 Patriot power come with a transferable 4-year engine warranty. That’s a strong indication the Roseau engineering team got the Patriot right.

We would quantify this kind of long term coverage as tangible value. How much would a 5-year engine warranty cost if you had to buy it?

One look at the Patriot’s crank and bearings gives a clue to the strength of the engine. Its bearings measure 40 x 80mms compared to the 800’s 35 x 72mm! The new, beefier crank and bearings feed power to Polaris’ tried and durable primary clutch through an enlarged taper.

There’s also an all-new, jinormous drive belt built just for the 850. Polaris engineers have expressed a high level of confidence in both belt durability and clutch performance. A lot of this confidence comes from the new engine mounts and their orientation as compared to the 800 Liberty’s set-up.

Looking under the hood, the Patriot’s architecture is visually appealing with a rationalized, shrink-wrapped look to its cylinders. In fact, external cooling hoses have been eliminated by casting water passages internally.

The new VES exhaust valves use a smart servo-operated actuator and as a result are much more accurate than previous designs. Big Gulp 50mm throttle bodies feed a Polaris Cleanfire Semi-Direct Injection (SDI) system and the new 850 Patriot weighs-in just 6.5 pounds heavier than the 800 Liberty.

When speeds rise and the loud handle is fully compressed with both skis pointed up Kevlar Lake, the Patriot 850 feels stronger than the ETEC – not by a large margin, but it does feel like its pressing more meat into white top.

Attempting to compare these 850s in West Yellowstone last February at 6000 to 9000 foot altitude would not be conclusive and that’s the only place we’ve had the two 850’s in one place at one time so far.

It is possible the new Patriot will run away from the Rotax 850. It’s possible, but if it does it’ll be close.

However, if you were Polaris and bringing a new engine to the market to compete with the known market leader’s 850, would you take advantage of the luxury of testing your new engine against Ski-Doo’s in-market engine and make any necessary adjustments or tweaks before going into production?

Supertrax Onlinehttps://www.supertraxmag.com
Check back frequently for new content and follow us on social media!
Previous articleHerfindahl Wins At Cross-Country Opener
Next articleHow To Do Québec!