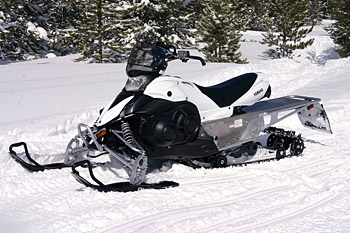 One of the biggest benefits of coming with a universal Yamaha platform would be the ability to get a reasonably light, value sled on the market to widen the range of potential customers Yamaha could go after. In effect, the company would be fishing from a way bigger pond than it is now.

There are two possibilities here. First, the 973cc triple used in the Viking is a very clean, proven, carbureted 4-stroke that produces nice power in the 110-115-hp range.

Using this engine in a lighter chassis would deliver excellent power-to-weight and the price could be set considerably lower than the current EFI Vector giving a lot of motivation to potential buyers who have pigeon-holed all Yamahas as “too expensive”. We believe this carbureted engine would have little detrimental effect on Yamaha’s CAFE numbers.

The other possibility would be taking the Phazer’s potent firecracker of an engine and using it in a “universal” platform.

At 80-hp the performance would likely be pretty similar to the current Phazer because that sled is already quite light for a 4-stroke. However, the newness of a fresh sled might attract customers who walked past the existing Phazer because of its unconventional looks or who just wanted a sled that looked more like others in the marketplace.

We think a Yamaha “budget sled” could be downgraded to gas cell shocks. The marketplace has some very good steel-bodied units that deliver incredibly good ride results.

Besides, Yamaha’s selection of skidframes already offer excellent ride and could give up a little without hurting anything.

A lower cost gauge package similar to the existing Nytro or Phazer would keep costs down and a .91 x 121-inch track would save weight and money, too. We’ll see.