IS SNOCROSS GOING THE SAME ROUTE AS SNO-PRO? 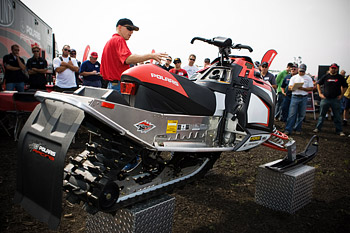 We’ve been puzzling a bit about a slowly ebbing enthusiasm for snocross racing compared to the same loss of focus we observed a couple of decades ago for oval racing.

First, lets be clear: There are still a good number of people racing ovals and there are still lots of snowmobilers who are fans and participants in snocross.

Will snocross disappear? We don’t think so, but is it still the same top-of-mind influencer when it comes to buyers making decisions in showrooms as to what brand or model they will buy?

Good question, but we do know that oval racing lost its ability to direct buyers into showrooms when the race sleds became completely exclusive racer-only sleds and not the kinds of snowmobiles people could buy at a dealership.

In fact Sno-Pro became so dominated by Ski-Doo’s twin track racers, the rest of the industry simply quit building sno-pro oval racers and packed in their participation. Interestingly, this dominance didn’t help Ski-Doo’s sales one iota.

Today, snocross, at least at the pro level, is being so dominated by the race-only sleds built by Polaris and Arctic Cat, we wonder if consumer interest is dropping because of it.

We wonder if the sleds being raced at the pro level were the same ones you buy in showrooms, more people would identify with the brands and support the sport. History does repeat itself, you know.