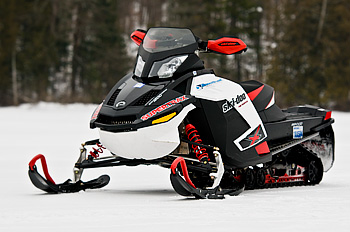 This sled comes with a 16-wide 137-inch track and we can’t help but think it’s the best crossover combination for both deep snow and trail riding.

The actual flotation and ground pressure stats are almost exactly the same as a 15-wide 144-incher but the handling on-trail is way better.

We rode the sled in powder for a couple of hours and really liked the way this 1200 4-stroke package worked.

This particular version of the Renegade will likely be grossly overshadowed by the same sled powered by an 800 E-TEC but we’ve gotta say, in most crossover situations, this one works exceedingly well.

There’s never the feeling the sled is overly nose-heavy and although there is some extra weight from the 4-stroke triple underhood, the sled handles very crisply and, in powder, doesn’t feel like it’s trying to mole itself under the surface like so many 4-stroke sleds do.

Although this mill doesn’t make the same attractive exhaust noises as the rear exiting exhaust Yamaha triples, when you’ve got the RPMs cranked and the sled is being accelerated hard, it makes some great sounds.

The throttle response at these moments is neck-stretching strong and this sled feels like it’s making way more than its 130 claimed ponies.

We think a lot of 2-stroke-only lovers could be converted to a 4-stroke with a couple of rides on this one.