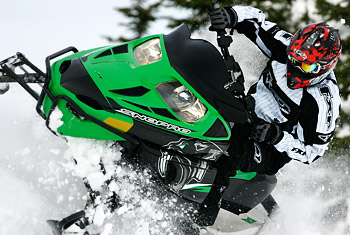 There’s a lot to be said for the steady evolution of a snowmobile platform and the 2011 Z1 is no exception. Cat has tweaked and refined this sled every year until it’s become really better than the sum of all its parts.

Although we prefer the sounds made by a 4-stroke triple, this even firing parallel twin makes great power and the engineering team have done such a great job with clutching, after riding this year’s, we were convinced Cat had bumped the engine several horsepower.

Yes, we prefer the suspension calibration you get with the LXR package (the SP is a bit stiff at lower trail speeds) but this is still a great handling sled with plenty of power right when you need it.

Another thing we’re completely sold on is the SP’s 1.25-inch lugged track. This 128 hooks up perfectly and ensures you’re getting all the power to the snow.

We’ve always said you can tell the true character of a snowmobile when it’s ridden fast.

We found this year’s Z1 was dead stable at high speed and handled very predictably, inspiring confidence the faster we rode it.