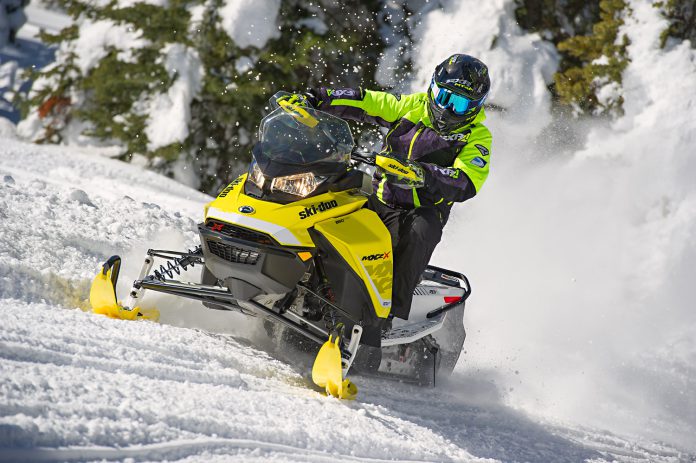 The battle for SnowTrax SOFTY laurels reached a new level of intensity as the hardcore snowmobiling staff at SUPERTRAX Media cast their ballots for the snowmobile industry’s ultimate award.

Because of its myriad design and performance innovations the all-new G4 is nearly impossible not to recognize. It’s the first sled to tackle the issue of centralizing engine mass from side-to-side, a feat previously limited by the physical layout of all modern big-bore twins.

By re-thinking the design of the stator into a flat, rather than tubular structure, Ski-Doo was able to centralize the 850 engine’s positioning by over four inches. The result is a dramatically smaller frontal profile and improved rider ergonomics because of its revolutionary “Ergo-Step” side panels. The tunnel now contains the coolant, rather than carrying heat exchangers, reducing weight while improving efficiency.

The G4 uses both Ski-Doo’s industry-leading rMotion rear suspension and the brand’s effective RAS double A-arm IFS. Handling and ride quality produced by the new G4 is a full notch up from the former platform and right at the top of the industry.

Ski-Doo’s ability to innovate and break new technological ground in the snowmobile industry is unrivaled in MY 17.

Ski-Doo takes home all the hardware this year, sweeping both the SOFTY and RAD Awards. Without any doubt, the new E-TEC 850 twin powering all G4 chassis variants displays impressive technology in one efficient, powerful package.

From its flat stator that narrows up the engine dramatically to a two-piece forged crank with pin-point oiling for durability, to its diesel engine-derived cast iron ring lands, the 850 is bristling with both performance and durability enhancements.

Any description of the new 850 Rotax must acknowledge the revolutionary pDrive roller primary clutch. For decades the concept of using rollers instead of friction-laden buttons to power the primary’s moveable sheave has been debated, however it took the fertile minds at Ski-Doo to make the undeniable benefits of a roller tower design a reality.

Clearly, Ski-Doo’s Rotax 850 E-TEC and the pDrive primary clutch are deserving of this year’s RAD Award.

On behalf of Supertrax Media we extend hearty congratulations to Ski-Doo on these landmark accomplishments in MY 2017.